To share your memory on the wall of Myrtle Hickman, sign in using one of the following options:

Print
No services will be held

We encourage you to share your most beloved memories of Myrtle here, so that the family and other loved ones can always see it. You can upload cherished photographs, or share your favorite stories, and can even comment on those shared by others.

Posted Mar 29, 2021 at 09:08pm
Deepest sympathy to Myrtles family. What a beautiful picture of her here and on facebook.
Prayers that beautiful memories help heal your broken hearts.
Diane Savoie
Comment Share
Share via:

Posted Mar 29, 2021 at 06:00pm
Trudy and family I am so sorry for your loss. What a beautiful lady she was. I hope your many memories with her bring you some comfort during these hard times.
Comment Share
Share via:

Posted Mar 29, 2021 at 02:14pm
I am so sorry to hear of Myrtles passing. She called me a few weeks ago to chat, since she hadn't been riding the bus for the last year we didn't get to visit as often. It was funny, when I got to know her, that I had babysat most of her grandchildren. She was such a sweet lady. I loved visiting with her and will dearly miss our phone calls.
Comment Share
Share via:

Posted Mar 28, 2021 at 08:10pm
Dear Trudy and Jan, I am so sorry to read of the passing away of your dear mom. She was such a lovely lady and always so nice to me when I would be in your home. I remember that she always seemed to have a big smile and enjoying her day - even the nights of your slumber parties! And, as luck would have it, your mom and my mom became good friends - cards and coffee chats. I'm sure there are many wonderful friends ready to welcome her. Blessings to you both as you continue to share your treasured memories of your mom with your family. My sincere sympathy, Jean Ann Murphy Colon
Comment Share
Share via: 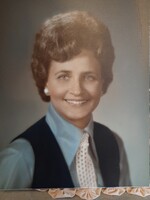